Note to self: Don't put the toothpaste next to the zinc cream 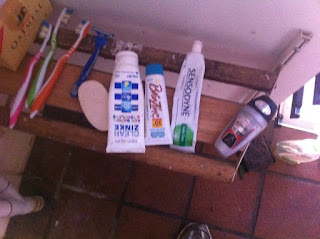 I had one of those experiences that comes to those with a somewhat distracted and always rapidly spinning mind.
I am currently researching an article on the steel industry in China, and the slow down of this industry and its therefore knock on effects for the Australian iron ore and metallurgical coal industry.
These articles for the eight of you who read them regularly are full of complex mathematics to do with export tonnages and percentile decline ratios and the like.
Thus whenever I am in the middle of working one of these articles up I am constantly doing mental arithmetic in my head.
Indeed once while out cycling I calculated to plus or minus one percent the entire fugitive emissions of the Queensland gas fields, involving 26,000 wells and metres cubed flow rates per day, month and year, and all the rest of it.
I guess I am a maths nerd these days, anyway I enjoy it, though clearly it is not for everyone.
In fact having just written that, I now have an answer for the literally countless people who constantly tell me to go to Vipassana.
For those who don't know Vipassana is silent meditation, you can go for one, three or a heavy commitment of ten days.
Now I have no objection to anyone else going, but I do get annoyed beyond belief by the comet tail length trail of people who tell me to go.
They usually do this if I make the mistake of mentioning that I am unhappy and my traumatic childhood is the root cause of the current discontent.
Invariably the person then says: "You know what you should do? Go to Vipassana."
To which I have to choke back the comment: "Well you know what you should do? Shut the fuck up before you've got no teeth."
Now the reason I say this is because Vipassana is a great thing for some, but not all. For me it is clearly not the right thing because as a child, my parents refused me a voice.
I was never allowed to state my case of innocence in the latest thing me or my brothers were blamed for.
Thus, clearly, wilfully signing up to have no voice, is not something that a) is right for me and b) I am EVER going to do.
Anyway I mention that because in writing above I finally realised I have an answer for the people who constantly tell me to go to Vipassana.
Which is I am going home to do my own version of silent meditation, meaning sitting quietly and doing a lot of fiendishly complex sums in my head.
This invariably works for me and sometimes I look up from my sums and realised that evening has now fallen or that I am twenty kilometres further along my bike ride than when I last took notice of the surroundings.
However the down side of this furious internal calculation is that I often don't take adequate notice of what I am doing.
This had some ramification recently when I turned the water on to do the washing up, got distracted by the rush of mathematical thoughts blowing through my skull and when I finally thought to myself: 'What is that water trickling noise?' and noticed I'd left the water on, the sink had now overflowed onto the kitchen floor and a sort mini-Matterhorn of foamy suds had built up in the sink.
And likewise when I went to clean my teeth last night. 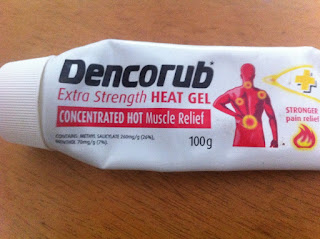 With my head calculating that an increased use of scrap steel in Chinese smelters would see the consumption of coking coal in China fall from 600 million tonnes to 530 million, I put the toothpaste on the brush and then put it in my mouth
Thankfully I immediately registered that something was amiss, and that my normally minty tooth gel tasted like....., well, not minty that's for sure.
It was kind of a burning industrial sort of taste, so I spat it out and looked down at the little shelf next to the sink.
Sure enough, in my distraction I had put the zinc cream on my tooth brush.
Problem rectified, I put the correct paste on the brush and gave the dontics are good going over.
Then once I'd cleaned my teeth I moved the zinc cream and toothpaste to the farther ends of the shelf in the hope that I wouldn't make the same mistake again.
On the topic, and for those who have a sporting background, or indeed are not as young as you used to be in the lumbar area, and I'm in both those camps, hear this.
There is a worthy truism for the change room: whether male of female, make sure you urinate before you rub the Dencorub on.
I don't think I need to explain why. 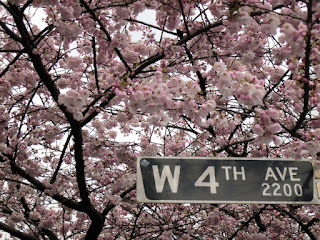 Final note from me on doing things when distracted and because it allows me to put in this nice picture of the blossoms of spring on the street where I used to live.
When I was living in Vancouver, I moved into, now that I look back on it, my first place where I lived alone.
My friend Dean from Vancouver went to California for the summer, riding his bike with his friend from Germany Tomas.
As such he asked me if I would like to live in his place for the summer, pay the rent and keep it warm for him.
And believe me, when it comes to Canada, the expression 'keeping it warm' has real relevance.
So I accepted with alacrity and moved my backpack worth of possessions in in one car trip.
Dean's apartment was on West Fourth avenue, the heart of the hippy district, somewhat like the west end of Brisbane or Newtown in Sydney.
It was a great location, and, again looking back, I see that it was another time I was really happy. 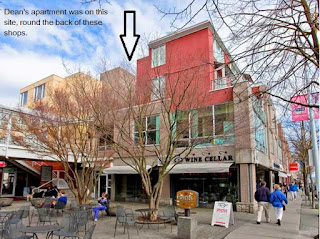 I walked to my work, a few blocks down West Fourth at Greenpeace, I drank in the local pubs with my best friend Sean from Toronto, and generally had a great time.
It was the first time I lived alone, no one was there telling me to clean up, no one else could tell me what time to go to bed, it was great.
Also, the apartment was part of a complex, so if you wished for company you could walk along the external hallway and visit with some of the other people in the complex.
The apartment itself was a bedsit comprising two rooms.
There was a bathroom and one other room which was a kitchen and living and bedroom all in one.
As such space was at a premium.
So it was that one night I went to make  a meal including eggs. (which I still ate at the time, I'm a near vegan now).
So I got out the fry pan and poured in some "olive oil" and then while waiting for the oil to heat up, I went to the fridge and got out the eggs.
When I came back to the stove, I looked down and saw a white boiling morass of bubbles.
I stared for some moments, and such a callow youth was I (22 years old) my first ludicrous thought was; 'gee Canadian Olive Oil sure behaves differently to the Australian stuff'.
Then I looked back to the shelf to check the ingredients list on the olive oil in case Canadian Oil contained kryptonite of something like when I discovered the problem.
I kept all my kitchen things on the same shelf and without thinking I had picked up the dish washing detergent which rested on the shelf next to the oil.
I can honestly say that I was (and possibly am) such a domestic ignoramus that I nearly went ahead and cooked my eggs anyway, thinking this was just another new experience for an Australian in Canada, getting used to oil that bubbled when cooked.
If so I would no doubt have eaten the first mouthful and mentally remarked: 'gee Canadian chickens must get washed thoroughly and often'.
I'm sure you all have your own experiences of things that happened when not paying attention.
A common one is people who have driven the same route for years tween work and home.
Then they change jobs or move house, and for some weeks after the change, you have to constantly focus on remembering to drive to the new correct location.
Else, you could drive into the car park at your old work one morning and an old work colleague would come up to you and say: "I thought you quit?"
Another one that I can surely attest to from my drinking and smoking days is the regular occurrence late, late on at a good party.
You pick up the can of beer you thought you were drinking and take a swig, thence to discover that there is a cigarette butt in it.
And so the lesson at the end of the day out of all this is that whatever you are doing remember to stay focuss....., oh look, that dog's got a puffy tail.